It’s been a very busy week for Heavers Farm sports, with various events going on.

First, last Wednesday, there was the Year 3 & 4 Tag Rugby Festival at Norbury Manor Primary School. The children played phenomenally well and, although no scores were kept, the Heavers team won nearly all of their matches!

On Friday, Heavers hosted the first round of the Croydon Girls Football League. Teams from Selsdon, South Norwood and Cypress primaries all attended. Heavers’ girls played absolutely fantastically and won all but one match, in which they conceded one goal (in the last 20 seconds) to reigning champions, Cypress. A special mention must go to our star goalkeeper in that match, Bruna. The next round is at Heavers Farm again on Friday 27th November.

Finally, today Heavers’ year 5 and 6 tag rugby team battled treacherous weather conditions at Old Whitgiftians for the Croydon Schools Tag Rugby Final. This was a really tough event, competing against the top schools in Croydon and we played very very well. Resulting in Heavers placing 6th out of the 32 teams in Croydon that entered. A special well done to Frank Collins from year 4, who stepped up and joined the year 5 and 6 team for this competition.He was a fantastic sportsman and team player.

Well done to all that took part, as well as coaches Mr Jackson and Mr Samuels, and check out the pictures from the tag rugby finals below. 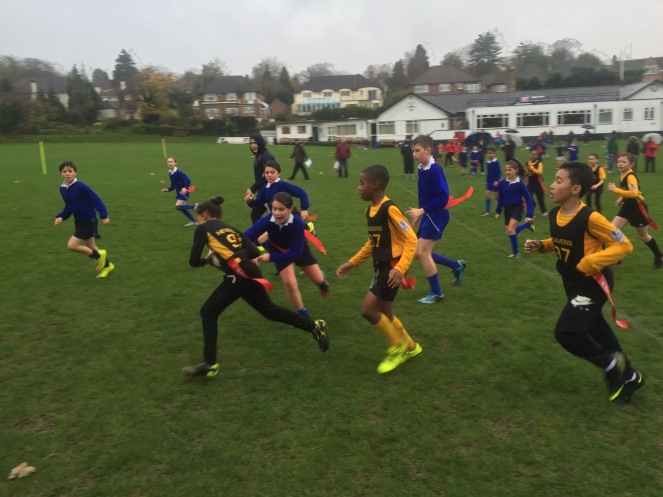